The AMI Arts festival, now in its second year, is a celebration of the amalgamation of cutting-edge contemporary arts and traditional crafts. As the prevailing darkness slowly recedes, AMI Arts festival 2021 aims to touch the lives of people with hope, positivity and celebrations. The festival will also bear a reflection of the flagship programs organised by KCC throughout the year.

AMI Arts Festival makes it a point to stand not only with the well-known artists, who have made their mark in the art world, but also with lesser-known talented artists, who have invested years of hard work without being recognized, and the promising youngsters, who are struggling to begin their journeys in the present situation.

In addition to visual and performing artists, we will also be showcasing crafts and folk performances. Besides exhibitions, a delightful flea market, music concerts, workshops, panels and a range of other programs, the festival will also honour selected visual and performing artists as well as craft people with achievement awards. So, come and usher in the festive spirit with us!

OPEN CALL for participation at the AMI Arts BUZZAAR!

We are looking for trendy, young, affordable brands and entrepreneurs who would like to showcase their designs, accessories, edibles and more at the festival on the 17th, 18th & 19th December, 2021 at Nazrultirtha in New Town.

With sustainability being such a key focus globally we are excited to see what you have in store for us.

All details including cost per stall, layout and design are in a downloadable guide on our website. Below are stall sizes and number of units available. 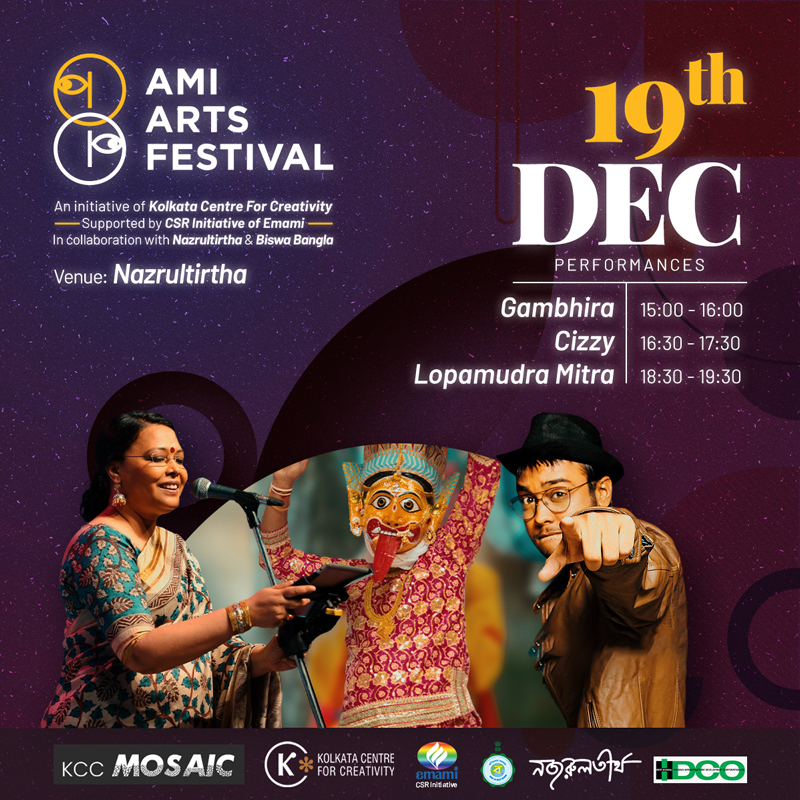 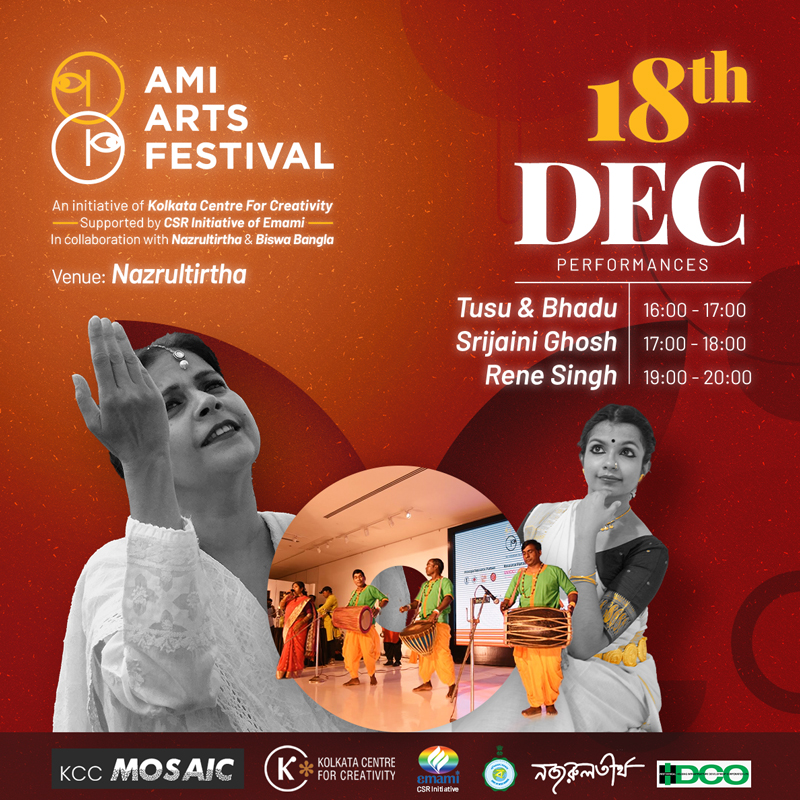 Attend the Sketching Session of daily arts workshops at AMI Arts Festival 2021 to get a glimpse into how thoughts and imagination can be given shape through the medium of art.
Conducted by: Dipankar Roy
Date: 17th December 2021
Venue: Nazrultirtha, New Town
TIME: 12:00 – 13:30 Hrs (IST)
To register, click on https://pages.razorpay.com/pl_IUyrGTE1Bw6APx/view

Delve into the nuances of using pastel colours at our pastel session of the arts workshops from senior artist. At the AMI Arts Festival 2021, give colours to your imagination!
Conducted by: Dipankar Roy
Date: 18th December 2021
Venue: Nazrultirtha, New Town
TIME: 12:00 – 13:30 Hrs (IST)
To register, click on https://pages.razorpay.com/pl_IVIGWb6r9i8P1y/view 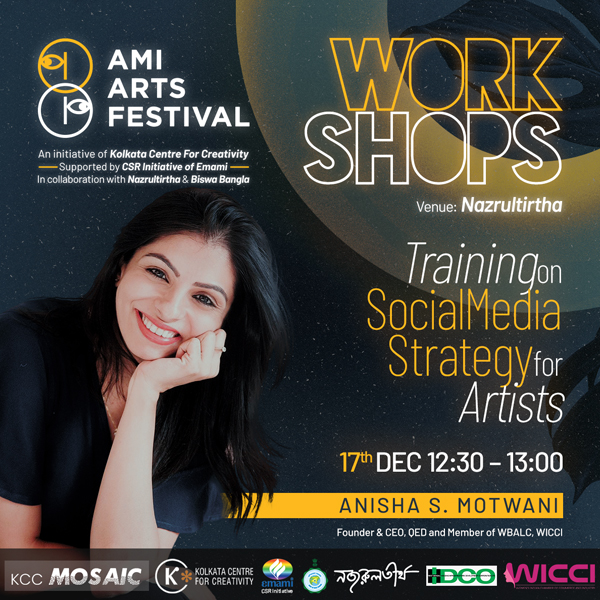 Attend the final session/ the watercolour session of the arts workshop at AMI Arts Festival 2021, facilitated by Senior Artist to understand the techniques behind transforming ideas into a work of art.
Conducted by: Dipankar Roy
Date: 19th December 2021
Venue: Nazrultirtha, New Town
TIME: 12:00 – 13:30 Hrs (IST)
To register, click on https://pages.razorpay.com/pl_IVIKbYTHGEne2t/view

Renowned for successfully merging traditional imagery in modern paintings, Jogen Chowdhury is a leading artist of our times. Born in Faridpur, Bangladesh, 1939, Chowdhury graduated from the Government College of Art and Craft, Kolkata, in 1960, and subsequently received scholarship from the French government and went on to study at the Beaux-Arts de Paris in 1967.

It was after returning from France in the late 1960s that Chowdhury developed his individual style. Always a powerful artist, Chowdhury's forte is painting in ink, watercolour and pastel. A favourite largely for his line drawings with ink, he explores the soft curves and angularities of contorted bodies using ink combined with pastels. Chowdhury freely uses the technique of crosshatching in his ink and pastel works. This has become the most discernible feature of Chowdhury's style. He constructs volume by modulating light and shade and uses cross-hatching to develop an illusion of middle tonalities. 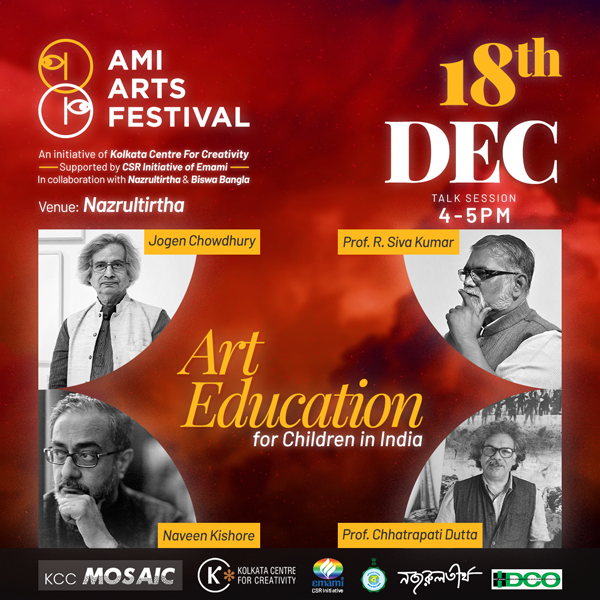 Chowdhury's notable exhibitions include, "Jogen Chowdhury: Formative to Recent", CIMA at Kolkata, in 2014; "Lignes de Meditation", Gallery Veda at Chennai in 2012-2013; 'A Calligraphy of Touch and Gaze", presented by Kalakriti Art Gallery at ICIA, Mumbai, in 2008. Chowdhury has also had solo exhibitions at Gajah Gallery, Singapore; Gallerie Foundation for Indian Artists, Amsterdam and the Fine Art Resource, Berlin.

Chowdhury was honourable jury member, Singapore biennale exhibition of art, Singapore, in 2003 and was honoured with the KalidasSamman by the Government of Madhya Pradesh, in 2001. In 1986, he received an award at the second biennale of Havana, Cuba. He was awarded the Prix le France de la JeunePeinture at Paris, in 1966. His artworks are part of important collections in India and abroad.

Jogen Chowdhury lives and works out of New Delhi, Santiniketan and Kolkata.

Born in Calcutta in 1953, Naveen Kishore received his Bachelor of Arts degree in English Literature in 1973, and began working as a theatre lighting designer. He established Seagull Books in 1982, a publishing program in the arts and media focusing on drama, film, art and culture studies. Today, it also publishes literature, including poetry, fiction and non-fiction. In 1987 Kishore established The Seagull Foundation for the Arts, under the auspices of which he set up The Seagull School of Publishing in 2012.

Kishore is a photographer who has extensively documented female impersonators from Manipuri, Bengali and Punjabi theatre practices. In particular he photographed ChapalBhaduri, a female impersonator of the Bengali folk theatre, Jatra, in a project entitled Performing the Goddess. Some of these pictures were exhibited as a part of a show titled Woman/Goddess. More recently in 2019 his suite of colour images from the Performing the Goddess project were exhibited at the Vancouver Art Gallery as a part of the Moving Still exhibition. More recently, Kishore exhibited his work at Chatterjee & Lal in Bombay in the exhibition Greenroom of the Goddess.

Kishore is the recipient of the Goethe Medal, a Chevalier de l'Ordre des Arts et des Lettres and was awarded the 2021 Ottaway Award for the Promotion of International Literature. Kishore has had his poems published with Scroll.in, Queen Mob's Tea House, Beltway Poetry Quarterly, Another Chicago Magazine, RIC Journal, Gargoyle, Poetry at Sangam, Sylph Editions, London amongst others.

R Siva Kumar is an internationally noted contemporary Indian art historian, art critic, and curator. His major research has been in the area of early Indian modernism with special focus on the Shantiniketan School.

He has authored over 15 books on modern Indian art and curated several important exhibitions including Shantiniketan: The Making of a Contextual Modernism and The Last Harvest: Paintings of Rabindranath, which was mounted at nine major museums across three continents.

Siva Kumar has been teaching art history at Kala Bhavana since 1981, and is the Mario Miranda Chair Professor in Arts at Goa University. Previously he has also held the ICCR Chair of Indian Studies at Carleton University, Canada.

He has received several awards for his contribution to the arts, including 'KesariPuraskaram' from Kerala Lalit Kala Akademi and 'Lifetime Achievement Award for Art History and Art Criticism' by the Government of West Bengal.

Chhatrapati Dutta completed his Bachelor in Visual Arts form the Government College of Art & Craft, Kolkata in 1987. In 1988 he did his post-graduation from University of Athens, Greece. He completed his Masters in Fine Arts from Kala Bhavana, Santiniketan. Soon Dutta mastered the art of painting on the reverse side. He has participated in many group exhibitions: In 2006 he participated in 'Art of Young Bengal' at Aakriti Art Gallery, Kolkata. In 2007 he took part in 'Agony & Ecstasy' at Aakriti Art

He is a skilled multimedia artist who studied art at VisvaBharati University in Santiniketan, and his practice explores the issues of post-colonial India, such as the rising consumerist culture of a developing nation through the lens of the city of Kolkata. Dutta employs subtle colours and textures to articulate complex symbols and moods, and is influenced by myriad sources. The artist is presently a lecturer at the Faculty of Visual Arts at the RabindraBharati University in Kolkata.

A freelance journalist based in New Delhi, India, Nilanjana reports on India and South Asia for top international publications, including TIME, the National Geographic Magazine, the Washington Post, TED Ideas, Al Jazeera, the New Scientist, the Daily Beast, Business Insider, the New Internationalist Magazine, and so on. Currently, Nilanjana works as an independent contractor, covering news and politics but her focus areas remain gender and social justice and the environment, especially climate change and its effects on different vulnerable communities across the world.

She has also extensively covered the COVID-19 crisis and its fall outs on marginalised communities. She began her career as a producer for the BBC's flagship World Today program on BBC World Service Radio in London. Nilanjana has won three international awards for her work on development and gender and was featured in the National Geographic Magazine's iconic Women of Impact issue in 2019.

WanjikuwaNgũgĩ is a writer, political analyst, and director of the Helsinki African Film Festival (HAFF) in Finland. She is also a member of the editorial board of 'Matatu: Journal for African Literature and Culture and Society', and has been a columnist for the Finnish development magazine 'MaailmanKuvalehti'. Her work has been published in The Herald (Zimbabwe), The Daily Nation & Business Daily, Pambazuka News, and Chimurenga, among others. 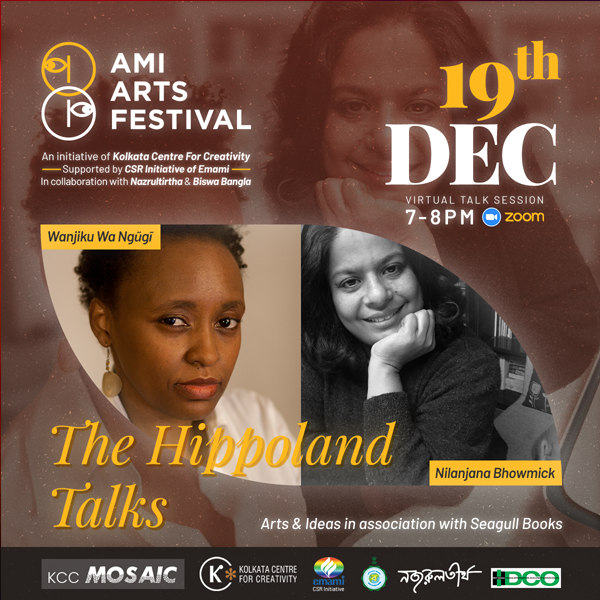 PushanKripalani is a cinematographer and a theater director. He graduated with a degree in English literature and earned his Master's in Film and TV production from the University of Bristol, with a specialization in Cinematography. He has worked on over thirty productions for the stage and for the radio, in capacities ranging from director to actor to designer, musician and producer. He is a founder member of the industrial theater co. As a cinematographer, he has filmed several features, as well as commercials, documentaries and shorts, working with ShyamBenegal, Ram Madhvani and Zafar Hai, amongst others, as well as for National Geographic, Discovery and the BBC. 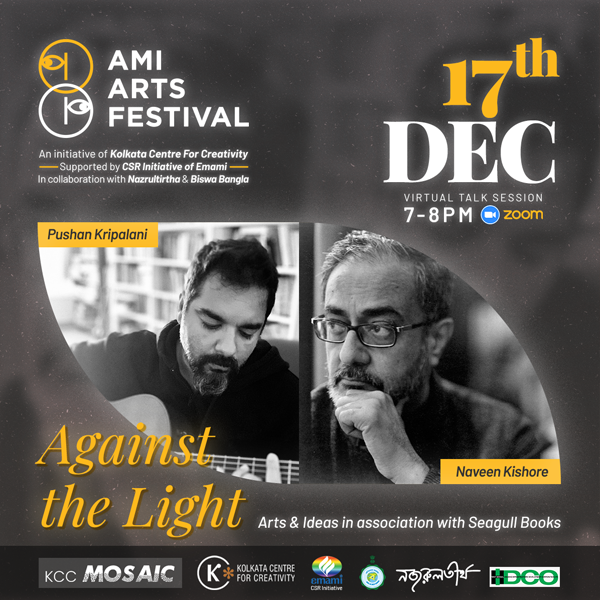 Raju Raman in conversation with Goutam Ghose (18th; 6:15 - 7 pm): At the AMI Arts Festival 2021, immerse yourself in documentaries on art and artists by renowned director Goutam Ghose. Join us on 17th December for a special screening of Goutam Ghose's documentary based on the life of a legendary musician, 'Meeting a Milestone: UstadBismillah Khan' and feel the magic of music come alive. Catch a glimpse into the world of devotional art, which has largely remained hidden and has often been superseded by our ever-changing, fast moving 'modern world-view' through 'Studios of Devotion' on 18th December. Experience the journey of a 'Great Master', K.G. Subramanyan, with 'The Magic of Making' followed by a conversation with the director, Goutam Ghose, and Raju Raman on 19th December.

Children's Films Screening: We invite you to be a part of a special screening and release of 5 animated films based on children's books written and illustrated by K. G. Subramanyan and A. Ramachandran, in association with Foundation for Indian Art Education, at the AMI Arts Festival 2021. Bring your children and let them explore the world of art and colours. 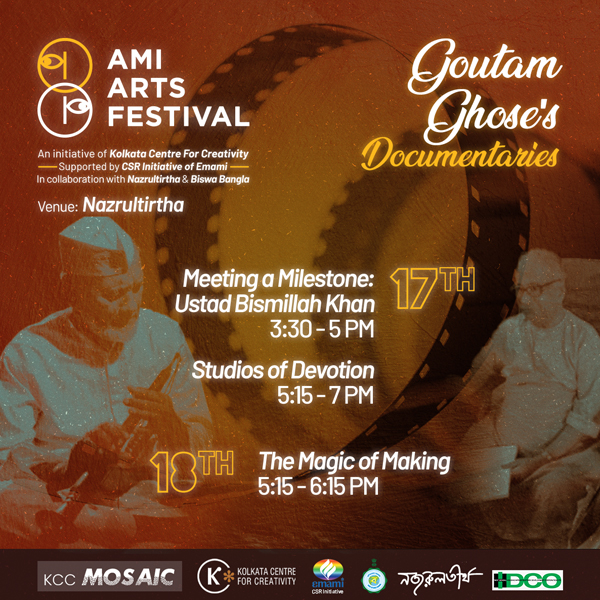 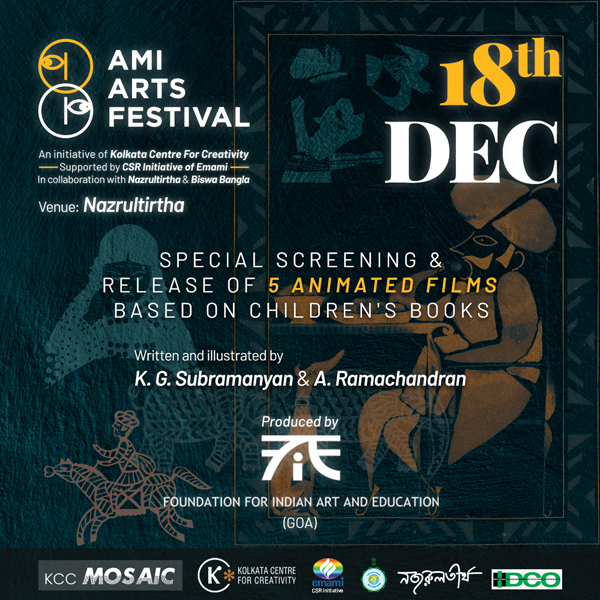 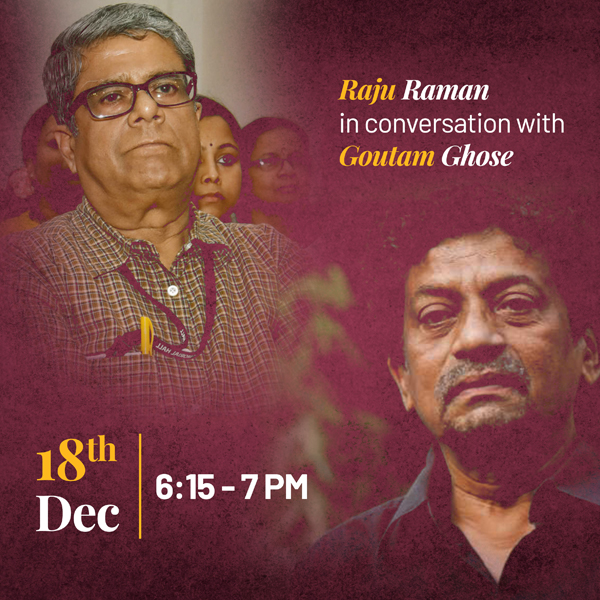 The dark clouds of sadness and misery are slowly fading. The future seems bright and hopeful once again. It is time to look at the brighter, more colourful side of life. Capture those colours of life in your artworks and send them to us. We are looking for artworks that are reassuring and life-asserting.

Please visit the link below to register yourself. (Please ensure to login using your Gmail account) 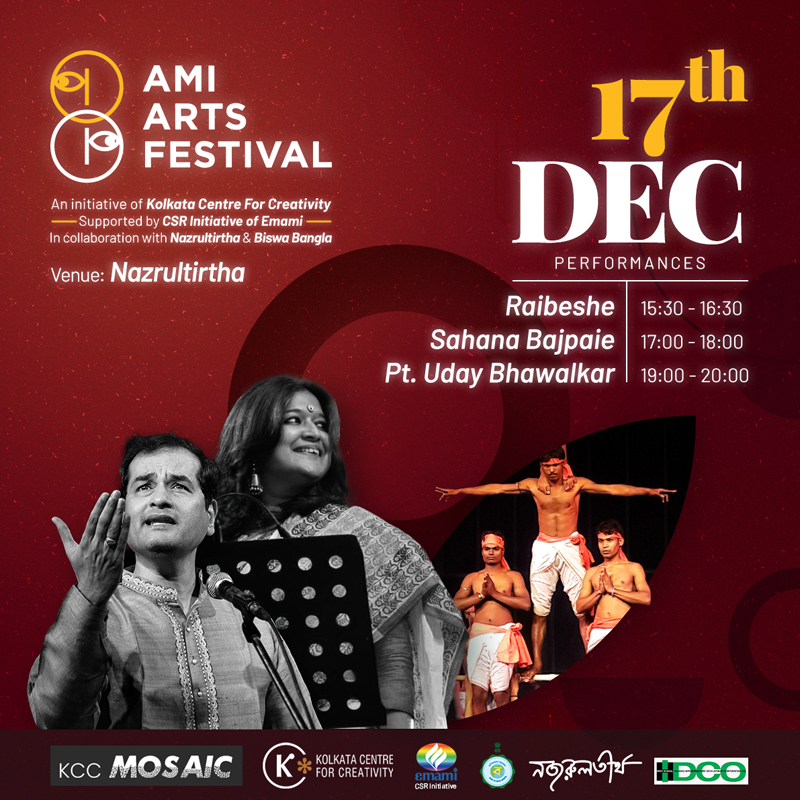